A information from the field of process engineering blow molding:

In case of blowmolding, during the first process step the heated extruder of a blowmolding machine obtains plastic grain which is then condensed, freed from gas, plasticized and finally homogenised to become a plastic parison.

Then, the plastic material is fed into the parison head which is flanged to the extruder. 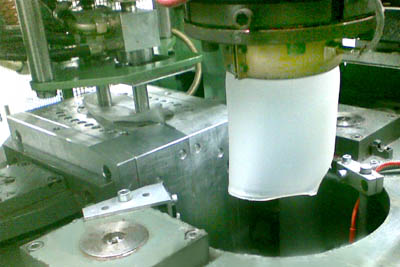 Here, the melted plastic material is formed into a hose. The hose leaves via a die vertically downwards. The hose diameter is adjusted to the article to be blowmoulded by using standardized blow pins and dies which are flanged to the parison head. The parison thickness and the weight of the blowmoulded articles resulting from the parison thickness are predetermined by selecting varying diameter differences from blow pin to die.

In case of strongly contoured blowmolded articles, different stretching directions result in different wall thicknesses within the blowmolded articles. In order to avoid these unwanted effects with regard to article quality, the wall thickness of the parison is changed by modifying the axial position of the conical blow pin towards the die. Blow pin and die are either internally or externally conically designed. 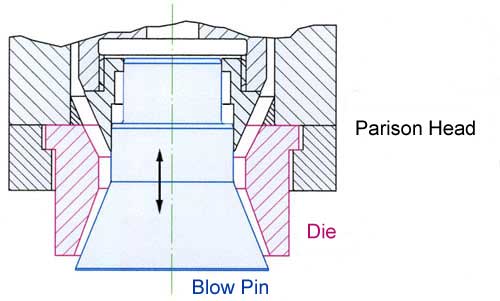 The parison gets heavier the more it gets out of the die. The heavier it gets and the longer it stucks in the parison head, the stronger the parison is stretched through its own weight. For this reason, wall thickness control is used to counteract sagging (and thus consequently also parison thickness reduction).

When producing blowmolded articles with strongly elliptical cross section, blow pin or die, normally will also be elliptically profiled in order to allow for the different stretching directions within the blowmold tool. The thinning in the area of great stretching areas is reduced by different parison wall thicknesses on the circumference. 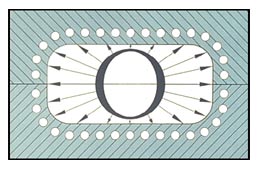 A consistent wall thickness of the blowmolded articles is of decisive importance for the material consumption. An optimum wall thickness ensures even surfaces without ribs. Cooling time can be considerably reduced with a highly constant wall thickness. In case of technically demanding blowmoulded articles, the radial profiling will be modified even during the blowmolding cycle. The profiling is modified by means of a flexible ring which can be precisely deformed via servo positioning cylinders. This process is called PWDS (Partielle WandDickenSteuerung = partial wall thickness control).

In the next step of the blowmolding process, the water-cooled blowmold closes around the extruded preform. Via a separator (knife, hot-wire cutter or parison closing flap) the preform is separated from the plastic parison which is continuously coming out of the die. During the separation process – or shortly after the separation process – the clamping unit with the blowmold tool inside moves in inclined position under the plastic material into the blowing station.

The compressed air stretches the preform. The preform then clings to the cooled wall of the blowmold tool. The air on the outer side of the preform escapes via the parting line of the mold and – in addition to this - via vent holes added to the mold. The hot deformable plastic material, which is being pressed against the wall of blowmold tool by means of compressed air then will release a great portion of its thermal energy to the cooled blowmold tool and solidifies. Normally, blowing pressures of 6 to 10 bar are used when blowmoulding polyolefine materials.

Due to the production process, the thermal energy is released via the outer side of the blowmolded article. Since plastic material is a poor heat conductor, the necessary blowing time and – consequently also the cooling time – considerably increases in a square function with progressing article wall. When doubling the article wall thickness, this requires four times the blowing time.

In order to reduce the long cooling times (and thus the lower productivity), of blow-molded articles with great wall thickness the inner side of the article is also cooled by means of purge air, reversible fans, water veils, cyrogenic CO2 or liquid nitrogen.

The design of the blowmold tool also influences cooling times by using the following concepts:

In addition, the cooling time of the blowmolding process is influenced by:

The blowing process is finished on the basis of a preset period of time. In the following period of time the compressed air still in the blowmolded article can escape via the blow pin. Then the blowmould tool opens and the blowmoulded article including scrap remains on the blow pin. As soon as the next preform reaches the required length monitored via photoelectric cell, the clamp unit including blowmould tool returns to the position directly underneath the parison head. 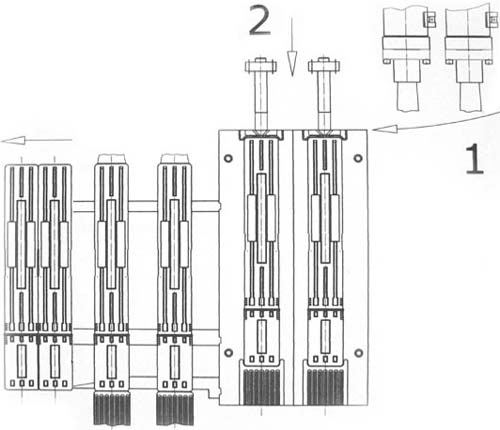 The blow pin again penetrate into the blowmold tool (Movement “2”). The next preform is blown. In the deflashing station, the scrap of the preform sticking out of the blowmold tool upwards and downwards is separated by means of a punching device. These segments called scrap are then transported to the grinder. The scrap is grinded there and will be added to the production process as regrind.

Shrinking of the article

Criteria for shrinking of blowmolded articles:

Blowmolded article before and after deflashing

Within the blowmold tool, the scrap area often is equipped with ribs thus increasing the cooling area and giving the scrap a higher stability during punching. 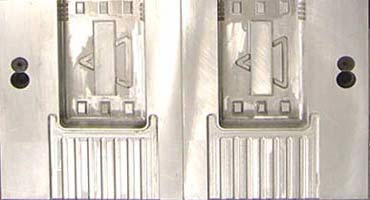 The picture above clearly shows the cutting edges sticking out to the mold parting surface. When processing polyolefines (PE * PP), different to what is shown above, the cavity is sandblasted. The surface structure thus created avoids that the melted plastic material seals the blowmold tool, that air bubbles are imbedded and a complete venting of the cavity fails, that the article surface is not formed correctly.

Necessary clamping forces for the processing of thermoplastic materials are calculated per running cm scrap separating edge when processing:

In addition to these separating forces forces of scrap squeezing need to be considered. The force created by the blowing pressure (blowing pressure x projected cavity surface on the parting surface , is not created at the time when the blowmold tool closes and consequently does not need to be added to the number of separating forces. Essential for the clamping forces required is which of these two forces is higher (plus safety margin).

Blowmolding on a single station blowmolding machine Kautex KEB 2-11. Seen from the electrical point of view:

At the beginning of the blowmolding cycle, the blowmold tool is open in the lower end position, the blow pin is in lower end position, the deflashing device is in basic position. During the mold opening movement, the initiator “Opening Limitation” is actuated. This initiator starts the function “Lifting of Clamping Unit”. When the upper final position is reached, the initiator “Upper final position” is actuated. If the photoelectric cell is switched off, this initiator provides the signal “Mold closing”. If the photoelectric cell is active, the initiator gives the starting signal for the correction of parison length.

Shortly before the position “Mold Closed” is reached, the initiator “Blow pin return” is actuated, which starts the return of the blow pin cylinder.
At the same time, the initiator “Blowing” is actuated, which gives the start signal for the timer “Cutter foreward”, “Start impulse support air” as well as for “Wall thickness control 1. Programme point”.
The cutter separates the preform.
The blow pin cylinder actuates in the upper final position the initiator, which releases the function „Lowering clamping unit”. The deflashing device needs to be in basic position or needs to be returned to basic position. The clamping unit moves to the lower final position.
The initiator “Lower final position” starts the function “Blow pin injection” and gives the start signal for the timer “Blowing deferred” and “Deflashing device foreward deferred”.

The blow pin lowers into the preform positioned in the blowmold tool. Depending on the length of the period of time selected for “Blowing deferred”, the molding process starts even before the blow pin is moved completely into the blowmold tool. Due to the early exit of compressed air, the hose tulip continues to open more and more. This is to avoid that overturning parison ends are molded into the article. In addition, the flush of compressed air leads to cooling down the material in the neck area, which often has a positive effect to the quality of the article surface of the inner neck surface of the article.

Two specialists who take care of your task with their common know-how: